If you plan climbing Piz La Varella from Capana Alpina, here you have my first-hand report with the route description and all the other details you might need. So keep reading.

The name of this mountain is available around in many different versions as you will see below in the basic data. I am using the name as it is written on the summit cross, i.e., La Varella.

You can climb this mountain together with the nearby Cima Conturines that is 9 meters higher, you will see the photo of it below.

Below is a zoomable Google map so you can see the larger and smaller areas, with all access roads as well as the climbing paths. I have very roughly marked the route with the line in three different colors.

From what I have seen, the mountain can be approached from various sides and climbed by following a few routes. But I have followed the route that starts from Capanna Alpina which is described here. I only describe the routes which I have climbed myself.

There is a large paid car parking at Capanna Alpina, it was empty when I was there, but it was full when I came back. The Capana’s photo below is taken on my way back.

From the parking continue in the north-east direction through the forest. This is the direction towards Col de Locia (2069 m, 6788 ft), visible in the picture above directly above the Capana. Just below the Coll, there is a water source, I do not know if the water is available all the year.

The path is first very mild as you go through the woods, and then it becomes steep before you get to the Col. This part is marked with the yellow line in the map above.

After that you have a very pleasant more or less flat section at a high elevation, the blue line in the map. Here, you are already above 2000 meters of elevation. This area is called Le Gran Plan The path raises very slowly towards Ju dal’Ega pass (2157 m, 7077 ft) seen in the picture:

This is how it looks when you look back, it was still rather early and the colors are not the best:

At the highest point of this section you will have a sign with many directions. So here you turn to the left in the direction of Lake Conturines (2518 m, 8261 ft). This part is the red line in the map.

You will start gaining altitude and the route becomes harder. After half an hour or so you will have the Ju dal’Ega pass below you as in the picture:

I was there early in the season and yet there was no lake at all, just an empty hole as you see in the picture below. This area all the way to the summit is just a rock, and there are no water streams around.

You will go to the right from the “lake” and up towards the pass that you see in the picture below. This part of the route is too-well marked. The summit of Lavarella is on the right but not visible in the picture.

The final summit slope is easy to climb, there are just a few simple passages where one should be a bit more careful, one is shown below: 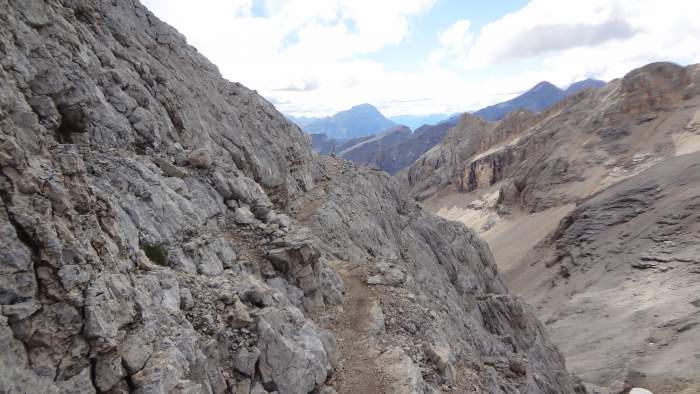 From this part you will see most of the route below, here is the view of Lake Conturines:

The last part below the summit of La Varella is shown in the picture:

After that you will see the summit cross on the pleasant and long summit ridge without any prominent spots:

I parked at the car parking next to Capanna Alpina (the fee was 5 euro per day), and started walking. It was relatively early, 5.55 AM, and there were no people around at all.

I had a feeling that my progress was slow, and I did not push at all, in fact I felt the altitude a lot. So I am sure anybody can do it in more or less the same time or faster.

The picture below shows the Fanes plateau as seen from the summit La Varella. This is a beautiful space with several 3000 meters peaks on the left, and the area is a national park. They include Cima Nove, Cima Dieci, Monte Cavallo, Sasso delle Croce, and a few more. I did not climb them this time, but I shall be there again…

On the right, not visible in the photo, there are another huts from where you can climb La Varella. This is Ücia Lavarela (Lavarela hut) and close to it is also Ücia de Fanes (Fanes hut). You can locate them on the interactive map given above.

On my way up just below the summit I met an Italian woman who was descending, and this was the only person all the way up. She mentioned it was windy on the summit but she was really lightly dressed. The story was different on my way back, I met quite a number of people going up.

This mountain’s normal route is very similar to what I have experienced in my climb of Sasso Piatto two days earlier. So you do not need any special equipment, any hiking boots will be fine, and a day pack.

As for accommodation, you can check at the Capanna Alpina and also in the Camping Sass Dlacia which is very close to it near the main road. This is a popular area and there are many options to rent an apartment or you can choose any of the camping spots around. You can check at Booking.com which I used myself and rented a flat in Arabba.

In summary, I had a great day while climbing Piz La Varella although indeed it was surprisingly cold and windy. You have seen my timing, and I can say I was not in best shape, so this is a realistic timing for anybody. I have included this mountain in my list of best mountains to climb in Dolomites without special equipment.

Just make sure you are well-informed about weather to avoid unpleasant surprises. I always have full waterproof equipment with me no matter the weather forecast.

During this trip to the Alps I climbed a few other mountains, so you can read about my tours to Tofana di Rozes, Piz Boe, and Sasso Piatto.

Thank you for reading, there is a comment box below so let me know if you have questions or comments.