Climbing Weissmies (4023 m) is hard regardless of which of the two normal routes you take. For both routes, the reason is the altitude, of course, and for the north route, you have a huge glacier in addition to that. 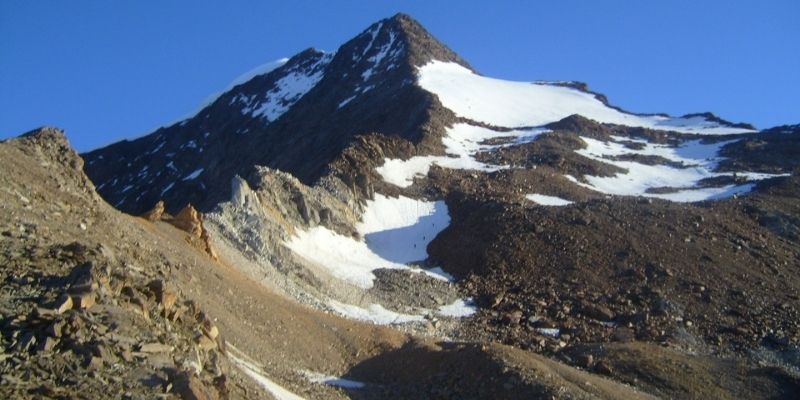 Weissmies is a beautiful mountain in the Pennine Alps, a mountain range that contains more than 30 peaks over 4000 meters, with the highest peak Dufourspitze (4634 m). Those are mountains that roughly divide the Wallis region in Switzerland and Italian provinces Piedmont and Aosta.

From a geological perspective, this could be understood as a border between the European and African continental plates, with the Italian peninsula moving northward for about 1 cm per year, creating the Alps in the process. Within this page, I provide some essential information about Weissmies and about one climbing route (from the south side).

Here is an interactive zoomable map so you can see access roads and also the details of the route:

The northwest route is a typical glacier approach through huge crevasses and everything that comes with it. I did not climb from that side, though I was inspecting it from a close distance while I was climbing the nearby Lagginhorn mountain (4010 m) a few days earlier.

See how it looks from that side, this is from my tour to Fletschhorn:

The approach from the southeast is mostly snow-free in the summertime up to about 3940 m, and it is without any cable car lines.

The lower part of the route from Saas Almagell village is through a pleasant pine forest, and it passes the Almagelleralp hotel at around 2200 m of elevation. After passing it, you should follow the signs towards the Almageller hut (at 2894 m), see the picture below. From the village to the hut you will need about 3.5 hours.

The route continues towards the Zwischbergen pass (3268 m), the top picture above shows the view from the pass towards the summit. Below you can see the Italian side under clouds:

From the pass the route turns towards the north either along the snow-free rocky ridge or along the slope that is usually covered with snow in the summertime, see the pictures below.

The ridge route is all visible here, and the summit is behind on the left:

At around 3950 m, you will be again on snow and the direction is obvious, towards the north-east with the summit in sight all the time.

Along this route, the mountain can be climbed directly from the village in around 8 hours. Sleeping at the Almageller hut is a good alternative, it is a pleasant place with running water in the toilet. I have seen some people camp in the rock below the Zwischbergen pass on its west side.

About the necessary equipment

Regarding the southeast route, you will be on the snow only above some 3900 m when the route is not steep and one could manage even without crampons, however, I would not go without them.

My ascent to Weissmies (4023 m) is one of the most memorable I have done. This is partly because I did it in a rather hard way, i.e., directly from the village Saas Almagell (1670 m), without staying the night in the Almageller hut what normal people normally do.

So I climbed the height difference of around 2340 meters in 8 hours, and then went back the same way. This was an overnight climb, without sleeping.

I was staying in Siviez, which is rather far from the place, so I set off around midnight and after a long drive I started from Saas Almagell at 2:30 AM, and I passed Almageller hut at around 6.

Soon after that, I spotted a few parties in the distance already at Zwischbergenpass (3250 m) where I arrived on 7:30 AM. Then mainly up the southeast face, I was on the top shortly after 10 AM.

This was a night with a full moon, so once above the woods, I did not use a torch at all. I became sleepy and tired. But the slopes of the Mischabel mountains on the other side of the Saas valley, more than 10 kilometers away, were in shadow.

And at one moment I noticed somebody’s light there in the distance; one single head-torch changing position and direction all the time. Somebody was climbing one of the Mischabel-range peaks.

So suddenly I did not feel alone, and I even started watching from time to time across the valley following the progress of that unknown person, as if we were partners in climbing. In a way, we were indeed.

As the dawn was coming, the torch across the valley eventually disappeared. But the presence of my unknown ‘partner’ stayed in my mind, and it made my climb easier.

Later, at some point close to the summit I passed two roped climbers. One of them told me: “I do not remember you from the hut last night.”

I said I was not there, and that I was coming from the valley. Then he replied:

“Everybody comes from the valley, but where did you sleep?”

I replied I didn’t, and this made him laughing.

“Did you hear what he said?” And they both started laughing. I was not in a mood to convince them and just continued. Those were some of the moments when one feels better to be alone in the mountains.

This route is perfect for a solo climbing, and for me only the final summit ridge looked a bit scary as I was sleepy and a bit dizzy. I used crampons on the upper part close to the summit.

It was tempting to traverse the mountains and to descend along the ‘normal’ northwest route towards Hoohsaas, but being solo, I decided to get back the same way. The north side route goes over numerous crevasses.

I had some issues with my camera, better to say with batteries, so I was able to have only one photos on the summit, really pity. Here it is, I asked a person from the group that came from the north side, on the right you can see Lagginhorn which I climbed later:

A few useful tips for those who would climb directly from the valley. At night it may be complicated to find the starting point in Saas Almagell. Try first to locate the church, when you pass it, behind it there is a sign and you should take direction left following the so-called Almagell rundweg, along a tiny water stream. After that just follow the signs.

Also take care above the Almageller Alp hotel, some 40 minutes after you pass it, at around 2400 m the route splits, so take the one that goes to the left. I missed it and continued in the wrong direction.

Once you are at Zwischbergen pass, it is best to switch to the ridge immediately. At this point, the southeast face looks so smooth and inviting and this attracted me to walk that way. But there may be falling stones if it is a busy day with many people on the ridge which will be above you. In fact the higher you go along the south face slope, the more complicated it becomes to switch to the ridge, and the ridge is the only final option in any case.

Regarding accommodation, I myself have been renting apartments through Booking.com. They have plenty of options with fully equipped apartments, houses, and hotels. Did you know that they have a loyalty program? You can save a lot when you make reservations through them several times.

Here is a YouTube video that shows ascent from the south side (this is the route I also climbed) and descent along the north, glacier side.

I hope you enjoyed the text, and I also hope you will be careful when/if you decide to go there. What I describe here was my second attempt, on my first I had to give up because of bad weather conditions. So you see, the mountain was still there. It will wait for you too.

If you are in the area and want to play it safe and hire a guide, please follow this link, they will find you somebody from the local area who will take you safely to the summit.

Please share it on your favorite social media. Anything related to equipment you can find in my separate page with equipment reviews.