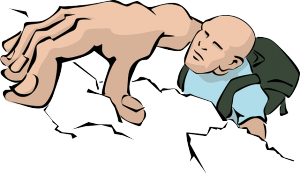 Platthorn (3345 m) and Mettelhorn (3406 m)  are two beautiful peaks in the Zermatt Alps. They raise at the north side of the Zermatt village.

The reason for describing these two peaks together is because they are so close that you can climb them both at one go.

Your reasons for climbing these two nice peaks could be these: they are surrounded by the greatest concentration of 4000-ers in the Alps so the views are spectacular. You might come to the same conclusion after seeing some of the photos below.

While for Platthorn you will not need any special equipment, the climb to Mettelhorn implies passing a relatively short glacier. So for this part, you will need crampons and all the usual measures of precautions for glacier walks.

There are two possible start points to climb Platthorn and  Mettelhorn, both in Zermatt. The first is from the train station. As soon as you leave the train go behind the station and you will see the route which in that part goes almost back in the direction of Tasch. After some time you will be zigzagging up the slopes of Wisshorn peak and then the route will take you around Wisshorn at an altitude of around 2700 meters.  You may see this in the map here below.

The second start point is from the center of Zermatt. It may not be so easily seen but try to locate the valley of Triftbach. There is a small water stream entering the town from the northwest direction and from Trift valley. This route leads you through the narrow Triftbach gorge and you will pass Trift Alp hotel far above Zermatt. It is at the altitude around 2340 m.

From there you continue in the north direction along pleasant meadows and at the altitude of around 2730 meters, you will see the former route on your right side. So from this point, the two routes merge and you are on your second part toward the summits.

The second route is presented in this Wikiloc map: 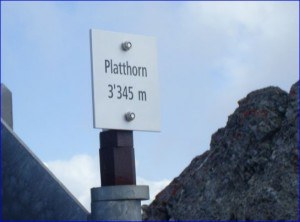 You will notice that the altitude at the Platthorn summit shown in the map is different compared to what I give above. There was obviously some problem with measurement, better disregard it.

On the right, you may see my photo from the summit showing the exact height of the mountain, which is also in agreement with Swiss Topo Maps.

But regarding the timing shown with the map, this is more or less the same as in my case, I climbed it in 8 hours.

Here are some photos from the route:

So this was my short report about the two beautiful peaks Platthorn and Mettelhorn. I hope you have enjoyed it. There are no people in the report, actually, I met just a few during the tour, which was surprising for such a beautiful day.

Regarding accommodation, I myself have been renting apartments through Booking.com. They have plenty of options with fully equipped apartments, houses, and hotels. Did you know that they have a loyalty program? You can save a lot when you make reservations through them several times.

Please leave some comments below. I shall be happy to answer any question.