Fletschhorn (3982 m) is one of three magnificent mountains in the Weissmies group. Here I describe the normal route from Saas valley.

Compared with its first neighbor Lagginhorn (4010m),  Fletschhorn it is lower by 22 meters, but the normal route is much longer, and it is famous for its north side. The mountain is located on the east side of Saas valley in the province Wallis  (Valais) in Switzerland, more details you may see on the map below. There are several numbers attributed to its height, I choose those on the Swiss Topo map.

The normal route starts at Saas Grund, a village in Saastal (Saas valley). The access to the area is from Visp city in Rhone valley, you will follow a good and attractive mountain road which passes several villages and ends up at the dam above Saas Almagell, at around 2200 m above the sea level. This is the only road to the deep Saas valley. If you come from the west along the Rhone, take the tunnel before getting to Visp.

So the starting point in Saas Grund is the same as for Lagginhorn, and for Weissmies west-side route. The public parking is at the lift station. From this point, you may walk up toward Kreuzboden and Weissmies hut, or take the lift to Kreuzboden (2400 m), and then walk along the path toward Weissmies hut if you want to stay the night there.

If you decide to walk all the way up, you will need up to 3 hours to the hut. From the Weissmies hut, walk in the north-east direction, partly the same route which leads to Lagginhorn. But at some point, the routes split and you go more to the north.

At 2970 m you will be on the small Talli (Tälli) glacier covered with stones and gravel. You should cross the glacier by going left (the north side) and then continue up, along a rather steep section with snow and ice. The ground and ice in this part can be rock-solid during the night and early in the morning. Crampons and an ice axe are absolutely necessary.

This will lead you to p. 3600 m, where you are on the upper part of Gruebu (Grüebu) glacier, and this remains so for the big part of the remaining route to the summit. You will then make a loop along the glacier going in the north direction and through a lot of crevasses. This way you will come to the ridge from where, for the first time, you will have an overview of the north-east side of the mountain.

At this point you are already at 3800 meters above the sea, so the remaining part is not steep but in one section this is a walk along a sharp cornice. You will follow the ridge in the southeast direction all the way to the summit.

Here below is the route roughly marked on the Google-Earth map, from Saas Grund to the summit: 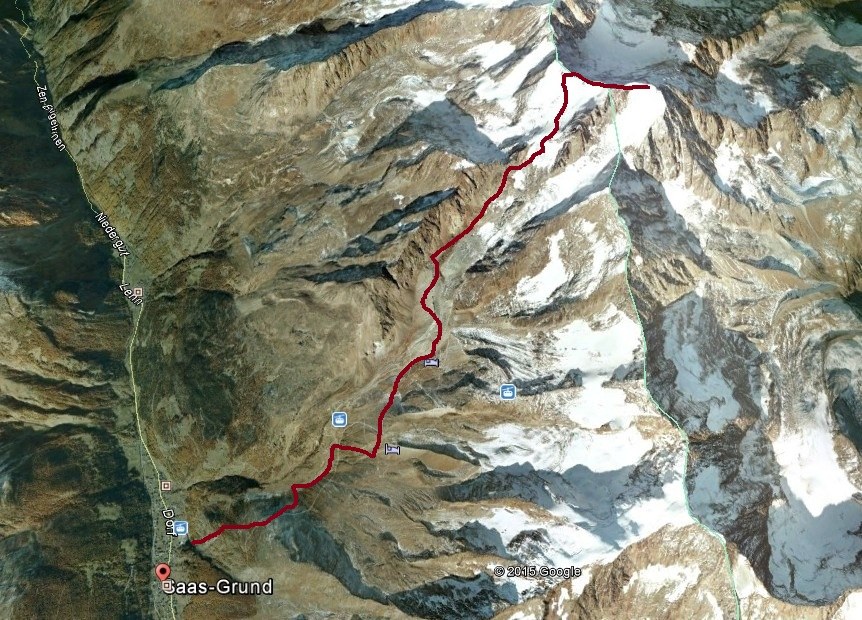 I did my climb in August 2008. I decided to climb directly from the valley, from an altitude of 1650 m. So I left Saas Grund after midnight, at 0:45 am. It was totally dark, in particular through the forest above the village. I passed Weissmies hut at 3:15 pm, there was no light inside, everybody was still sleeping.

I continued toward Fletschhorn and after a long walk, at some moment my leg dropped completely into the ground. When I managed to get out, I saw ice on my shoe and to my horror, I realized I was on the glacier. I took the map trying to understand where I was.  It was dark like in a tunnel, and the glacier was completely covered with stones and gravel. So I realized I was on Talli glacier. To avoid holes in the ground I passed to the north side and continued.

It was very steep above Talli glacier, and the ice was rock-hard and I was concerned about what would happen if crampons fail. At this point it became already visible, the dawn was coming and I could see my route.

My progress was slow, and soon two climbers appeared behind me, roped, and going rather fast. Obviously, they spent the night at Weissmies hut and they did not look tired at all.

When I arrived at p. 3600 m, I felt rather exhausted. The long walk from the valley and sleepless night took their toll. The two climbers on the rope were already far in front of me, on the glacier full of huge crevasses. I stopped to eat something and to see if I could continue or not.

I was watching the progress of the two climbers, and reluctantly had to accept defeat. I could not continue. I felt too tired, and for the remaining part through crevasses, I had to be focused. I knew also about cornice on the ridge section, and above all, I was worried about my slow progress and the fact that the glacier might become very soft in a couple of hours when I start descending.

So this was the end of my climb, I stopped at 3600 m, and I really hope I shall have yet another chance. Namely, I climbed the other two 4000ers in the group, Weissmies, and Lagginhorn, in the same manner: directly from the valley, and I managed. With Fletschhorn it did not work. But my estimate is that the distance is very similar to the south route to Weismiess from Saas Almagell.

A few years later I was climbing in the Simplon pass area, and I was watching the magnificent north side of the mountain. What to say, it was so inviting I wanted to climb it again. I shall, someday.

To summarize, climbing Fletschhorn is hard, the route is long and you need all the necessary equipment for glacier walks. Staying a night at Weissmies hut or even at Hohsaas hut (as you will see in one of the videos below) is the best way to climb. The upper route is through a lot of huge crevasses, so going solo is not the best idea.

As for the accommodation in this part of the Alps, I suggest visit this page within the site and you will find agencies which offer a lot of possibilities for everybody’s pocket.

I hope you enjoyed my story, please leave some comments. I shall be happy to read them and to answer any questions.

If you are in the area you might consider climbing the following nearby great peaks which are at a stone throw from Fletschhorn:

Here are two excellent YouTube movies about the normal route, in the German language:

See here the north side in a video from YouTube: