Punta del Hidalgo to Santa Cruz, or the other way around, is a route from coast to coast on Tenerife island. It is about 21 kilometers long and the highest point of the route is approximately in the middle of the route, at Cruz de Taborno, 1020 meters above the sea.

The route starts at the end of the bus line, which is completely outside of Punta del Hidalgo town, on its east side. To get there you will take a bus from La Laguna.

The route is marked and rather straightforward, you start gaining altitude just a few minutes after you start the trail. At some point, after about 45 minutes of walking, you will be at the edge of 300 meters high cliffs from where you will enjoy spectacular views of the north coast of Tenerife.

The area is volcanic, but green and beautiful. The path is rocky in the first half of the route on the north side. After that, in a short section you will follow the road, and in the remaining part before reaching the highest point of the route it will be a pleasant walk through thick woods and most likely through clouds. I did the tour in March, and in the upper part of the route, I was walking through the cloud, with less than 20 meters of visibility. You can be wet without noticing any rain.

After passing Pico del Ingles (986 m) you will start descending toward the south and Santa Cruz. This will again be first through thick forest and following very pleasant paths. There are several possibilities in this part, at least three routes and they all lead toward the road in Valle Tahodio and further toward the sea and the city, see the map below.

One route (red on the map) is a bit steep in the first part and it descends toward the dam Presa de Tahodio. The other two will lead you toward Barrio de Alegria, from where you will descend into Valle Luiz and then Valle Tahodio to join the first route. After that, following the road for about 3 kilometers you will be at the sea and in Santa Cruz. 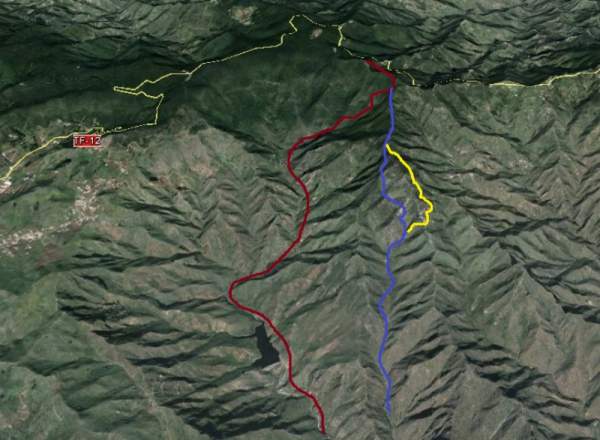 I walked the route in March 2015 in 6 hours and 10 minutes. It was a normal walk without pushing too much, but without making big pauses either. Just a pair of walking poles and comfortable walking shoes are all you need for this route.

I walked the route from the south to the north as well, i.e., from Santa Cruz to Punta del Hidalgo, in a bit less than 6 hours. It was on April 26, 2015, and without any clouds. So here are just a few photos to feel the atmosphere.

Nothing special is needed, here is a short summary:

To summarize, Tenerife has a lot to offer to anybody, regardless if it is about hiking or climbing. For the latter please have a look into my pages about Teide, Pico Viejo, and Guajara mountain. If you are more interested in hiking, please see this post on the tour along the north coast of Tenerife.

If you plan to go there, just to know that you can do your accommodation reservation through Booking.com. I have used their services many times in the past and can fully recommend them.

I hope you find the information here useful. Please leave some comments below.

Here are two videos about one part of the route, almost from the highest point toward Punta del Hidalgo: