Osprey has many great series of packs and here you have Osprey Stratos vs Talon packs comparison side by side, both series are with many packs in the small to medium size range. Keep reading and see which is better. 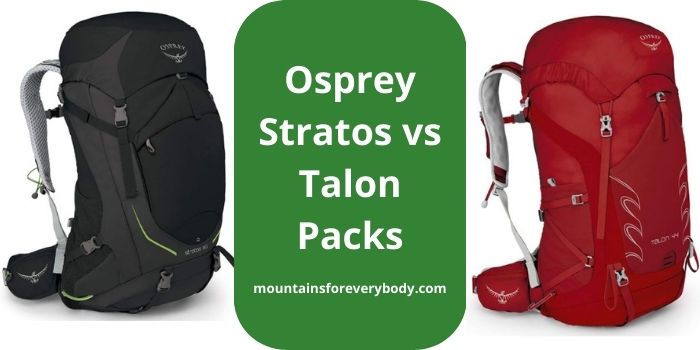 What this is about

So this is about two famous series from Osprey, both with packs built in several sizes. There are 6 Talon packs and they are in the range small to mid-size, the largest is the Talon 44 pack and the smallest is the lumbar pack Talon 6.

On the other hand, the Stratos series include a bit larger packs, in total 5 of them, with the smallest being Stratos 24 and the largest Stratos 50 pack. Now you know what sizes to expect in these two series, and below you can see their common features and the most important differences.

Both series have the same torso adjustability based on large Velcro tabs behind the side panels. So you just break the hook and loop connection and slide the harness up or down and press to re-engage.

Both series come with Osprey’s Stove-on-the-Go poles attachment design. This is a feature I use all the time because I never go without trekking poles. It is very convenient when you need free hands for a short scramble, to take a photo, or to drink or eat on the go.

In the Stratos/Sirrus packs you have the best possible ventilation based on a tensioned trampoline style mesh. So the pack is completely separated from the body and air can circulate in all directions. This is why the back of the pack is quite curved.

In the Talon/Tempest packs you have an accordion-type back foam covered with a breathable mesh. This is what they call the AirScape back panel system. Note that the pack is here in contact with the body.

So I have no doubt that ventilation is much better in the Stratos/Sirrus packs. Both systems are shown in the pictures:

The Stratos/Sirrus packs come with a removable rain cover stored in its own zippered pocket on the bottom. There is no rain cover in the Talon/Tempest packs.

The packs from the Stratos/Sirrus series are in the group of medium-light packs, while the Talon/Tempest packs can be described as ultralight. To realize this, compare the Talon 44 pack where you have the volume/weight ratio 40 liters/kg. In the case of the Stratos 50 pack, this is 29.4 liters/kg. Something similar you have in the other packs from two series. So the Talon/Tempest is a winner here.

In the Stratos/Sirrus series you have an internal sleeve located in the main compartment. However, in the Talon/Tempest packs there is a separate hydration sleeve behind the harness, see the picture. This is far more convenient and these packs are better in this respect.

I would give the advantage here to the Stratos/Sirrus series packs, see them both below and you will realize why, this is mainly about the largest packs in the series. For the smaller packs, this is not so important, in both series you have ventilated and continuous mesh that smoothly goes from the hip belt to the lumbar zone and it is good enough for such sizes.

Here, the difference is of importance for the largest packs only. So all of them have top and bottom access, but the Stratos/Sirrus 50 packs have extra zippered side access, this makes them better.

Osprey Stratos and Talon – which is better?

Here is my summary based on the arguments presented above:

So this was what I find important in this Osprey Stratos vs Talon Packs comparison. I did not go through every detail because there are many packs in both series and there are differences within each of the two series, so this would not make much sense. I have only focused on the most important similarities and differences.

In my view, substantial differences are in the suspension system and the back panel structure, and this makes Stratos/Sirrus packs better. It would be great to hear what you think, so use the comment box below and let me know. You might want also to read my Osprey Stratos vs Deuter Futura Packs comparison. Thank you for reading and have a nice day.