Here you have a detailed Osprey Stratos vs Deuter Futura Packs comparison, it may help if you are undecided about these two impressive series. Keep reading. 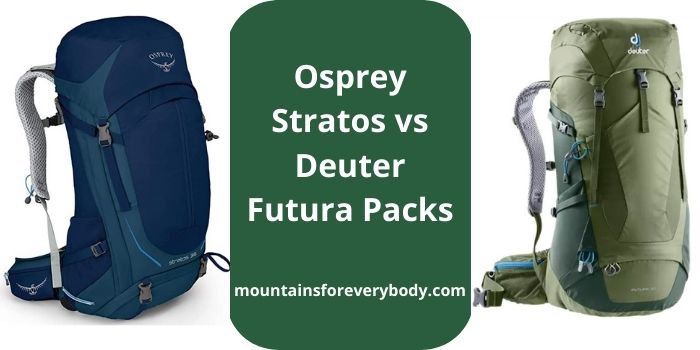 Why this Osprey Stratos vs Deuter Futura comparison

Both Deuter and Osprey are the leading manufacturers of backpacks and they are globally known. Of course, Deuter is much older, they have been around since the 19th century.

From a personal perspective, I own packs from both series and I am able to share some first-hand experience about these packs. Note that both series include many packs in various sizes, and there are important differences between smaller and bigger packs in each of the two series. For example, as of the moment of writing this text, there are at least 17 packs in the Deuter Futura series.

This is why it would be necessary to compare small and large packs separately or compare two specific packs from the two series. This is particularly important for the Deuter Futura series because larger packs have the word Vario in the name, and they also have Futura Pro sub-series. The word Vario indicates an adjustable torso size which you do not have in their smaller packs.

In the Osprey Stratos series there are also big differences between the small and large packs. So the comparison here is quite general, but I shall try to point out such details and differences within each of the two series so that you get some general idea about both of them. These are impressive series and you will realize from the features presented here why I decided to compare them.

Here are a few of the most important common features:

The tensioned trampoline-style ventilated back panel

This is a feature introduced by Deuter decades ago in this same Futura series. I started using it in 2003 in my first Deuter’s pack, the Futura 38. They do not build this pack any longer, but this does not mean that the pack is obsolete, it looks intact after so many years and you can see it here in the site in many of my climbs.

I am not sure how this works with patents and designs, but if Deuter had a patent, perhaps it expired after several decades, let me know if you know more. In any case, nowadays many top brands have such a trampoline style mesh in their new series. Below you can see how it looks in Osprey Stratos 24 and Deuter Futura 28 SL:

So if you have issues with ventilation, there is no better design. In this construction air can circulate in all directions, and the pack is completely separated from the body.

This also implies that the back of the pack is curved, and this takes some volume of the main compartment. Some even claim that this is not so great for the balance because the pack’s center of gravity/weight is a bit farther from the body. I do not think this is an issue at all.

In the case of Deuter Futura packs, they have specific packs for women and they always have SL in the name. The letters mean ‘slim line’. So you can see this in their Deuter Futura Vario 45+10 SL Hiking Backpack For Women. The picture above shows the smaller pack Deuter Futura 28 SL.

However, in the case of Osprey’s packs, they have a separate name for women’s packs, and this is the Osprey Sirrus series. But this is practically the same as the Osprey Stratos series, and in the rest of the text I shall sometimes write Stratos/Sirus instead of Stratos.

So in both cases, there is no difference in functionality in those gender-specific versions. This is mainly about the differences in the body shapes and the packs are built to accommodate this.

Both series come with this bonus. You have a bottom zippered pocket where the rain cover is stored. You do not have to use it, and if so you can use the pocket for other purposes.

Both series Deuter Futura and Osprey Stratos/Sirrus are very functional and organization can hardly be better. If you check my text about Osprey Stratos 24 you will see that this small pack has 8 pockets in total.

Here are some that I find important:

As mentioned above, both series have many pockets, but Deuter’s packs have some extras. You have upper bellows zippered pockets in many packs of the Futura series. This is a feature that I like, and in this respect, Futura Vario is better.

In the case of larger packs from Deuter Futura you have what they call the VariSlide System based on a strap with some buckles, see the picture below. Osprey Stratos and Osprey Sirrus packs have Velcro based attachment. Both systems are continuous-type adjustment and by this I mean that you can have literally any torso length within a given range.

I like more the system of Deuter Futura packs, but note that this adjustability is only in their larger Vario packs. On the other hand, all packs from Osprey Stratos/Sirus series have an adjustable torso length. This makes Osprey packs better in general.

You have probably seen the numbers +10 in the names of some of the packs in the Deuter Futura series. So this is an expandable collar that adds an extra 10 liters of volume when you need it. This can be useful when you start your unsupported tour and you have more stuff in the pack, like extra food and water for example.

You may need such a feature in various other situations. For example, in the case of a cooler climate, you would carry thicker sleeping equipment and more clothes so you need more volume, while in summer you will need less volume, yet you can still use the same pack. This makes the Futura packs better. The picture below shows how this looks, observe that the lid is floating type to accommodate for such an extra volume:

I think this part is easy, there is nothing that can be compared to Osprey’s Stove-on-the-Go poles attachment design. If you do not use trekking poles, this feature may be unimportant to you. But I always use trekking poles and I use this Osprey’s feature as well, so for me, Osprey is a clear winner here.

I think Deuter Futura is better here. There are several reasons for this. The largest packs in the series (the Vario packs) have top access, bottom compartment access, and also front U-shaped zippered access. Even very small packs in the series, like Deuter Futura 26, have this front access (but not the bottom access, you would not need it of course).

But note also that within the small packs in the Futura series you have two types, panel-loading packs and also packs with the lid and the top access. The first group has no other access point, and frankly, you do not need it in such small packs.

In the case of Osprey Stratos/Sirrus, the smaller packs are panel-loading type see my Osprey Stratos 24 as one example, and here you have only one access point. But their larger packs are top-loading with lid, plus a zippered bottom compartment access, plus a side zippered access.

With all this in mind, in this respect, I would give advantage to Deuter Futura packs. See how the front access in Deuter Futura Vario 50+10 pack looks:

It is not easy to find something better than the Deuter Futura hip belt system. These packs have massive padding and this makes the differences in the larger packs. For smaller packs, this is not so essential, but all in all, I find Deuter Futura packs better in this respect.

Deuter packs are not the best when it comes to weight. However, there are very good reasons why their packs are a bit heavier than some of their competitors. I already mentioned extra zippered bellows pockets on the sides, so these zippers add weight.

There is also a zippered divider between the bottom compartment and the main compartment. So the two compartments are completely separated when this is necessary. Not many packs on the market can match this specific feature, but indeed this zipper adds weight. Observe also the massive padding on their hip belts, this adds weight but it also adds comfort.

So which series is better?

You have seen my arguments and pros and cons regarding both series, and the table below summarizes what is expressed above. This is one possible summary, but if you would take some specific packs from the two series these results might be slightly different:

As you realize, the results are close to each other. So what would I choose? This depends on the size of the packs and on the purpose, this is how I see them.

So this is how I see Osprey Stratos vs Deuter Futura packs. What do you think? It would be great to hear from you, so let me know, there is a comment box below.