This is a comparison between the new exceptionally light packs launched recently, Osprey Exos vs Gregory Optic, so see which is better. 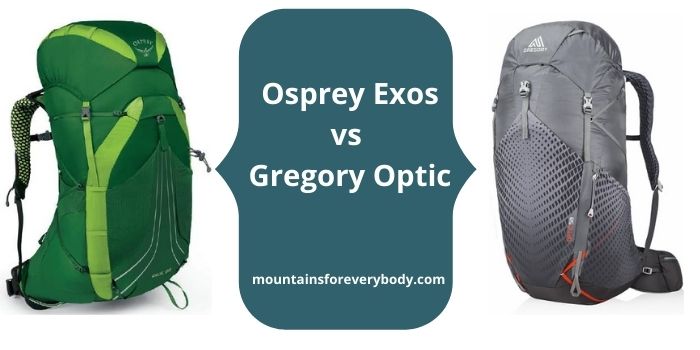 What this is about

As you may know, in 2018 Osprey has launched new versions of their Exos packs. The Exos packs have been around probably for 9 years or so, and have been upgraded a few times in the past. More about the previous Exos 58 please see in my review.

But this year they have also added the corresponding Eja series for women. Some of these packs I have described in my separate texts so see Eja 58 pack review and also Eja 38 pack review. The reason for mentioning them here is that they have the same basic features as the new Exos packs, and they are described in detail. So reading about Eja packs you will learn everything about the new Exos too.

However, there are several new packs from Gregory as well. In January 2018 a brand new series has appeared under the name Opic (for men) and Octal (for women). These are also ultra-lightweight packs, true competitors to the Exos packs from Osprey.

Within each of the sizes, you also have 3 sub-sizes. Now, perhaps you do not know, in the case of Osprey, the three sub-sizes are such that the largest of the three is the nominal size – this means that the Osprey Exos 58 has S, M, and L size where the L is 58 liters and the other two are smaller (52 and 55 liters). But in the case of Gregory, you typically have S, M, and L sizes where the M is the nominal size – so the Gregory Optic 58 is the M size while S is 55 liters and L is 61 liters.

Here I give these two packs as representatives of the two series. The other packs in the corresponding two series are similar so no need to present them separately.

I would like to say a few words about each of the criteria in the second table, and about the reasons why I give the corresponding affirmative or negative opinion.

All in all, in my view, the Gregory Optic 58 is a better choice in general. Note, I am not paid by the brands, these are just my views, unbiased hopefully.

The same conclusions hold when you compare the Gregory Octal 55 and Octal 45 vs the Osprey Eja 58 and Eja 48.

So what do you think? Let us know, there is a comment box below. I shall be happy to hear what you have to say.