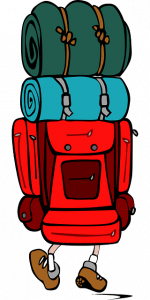 My tour from Chamorga to La Laguna has been the longest I have done on Tenerife island so far. This was a walk over 35 kilometers in 8 hours, and almost 6 hours literally in clouds.

The tour starts from the bus station in Chamorga. The line 947 will take you there from Santa Cruz in about 1 hour and 15 minutes.

Chamorga is a very remote small village in the east of the island and at the edge of Anaga mountains. So most of the route roughly follows the watershed line along the main Anaga ridge in the east-west (or northeast-southwest strictly speaking) direction.

The highest point of the route (at Cruz del Taborno)  goes over 1000 meters above the sea, so expecting great views is normal. But this was not my case. I was in clouds most of the time. In the first minutes I was disappointed, you will see my first picture and perhaps you will realize why I felt that way.

But very soon I realized this could be one the greatest experiences on Tenerife. And it was so indeed. I told myself, ‘man, enjoy the moment, a day like this is unique and you will never see it the same again’.

The map shows the route is around 33 km. But my route was way longer because I followed the road along longer sections than those in the map. The reason: once I was out of the rain forest in the first part, at Ensillada parking in Anaga, it was difficult to pinpoint shortcuts through the forest again. I did not have any map or electronic device (as usual in my Tenerife walks).

So I was on the road in the big central part of the route, and it has a lot of switchbacks and turns over there. If you zoom the map below you will realize this.

Later, I have discovered a great shortcut during my another tour, but did not walk it as it was not a part of that particular route. So, as you see I have a good reason to repeat the present one…

Here are a few photos in the part Chamorga – Tafaga – Ensillada. Clouds of course, they made the atmosphere mystique. Unbelievable atmosphere, and of course I was wet completely, although this was not the rain in the usual sense. The moisture from the cloud simply condensates on everything.

A few photos from the Ensillada area:

Here are a few along the road:

So this is a short report of my tour from Chamorga to La Laguna. I hope you can feel the atmosphere at least a bit. I walked it all the way to the beginning of the tram line and then continued to Santa Cruz.

There are days beyond words (in particular when English is not a native one), and this was one of them. The rest of memories I shall keep selfishly for myself.

No special equipment is needed, here is my short summary:

If you plan to go there, just to know that you can do your accommodation reservation through Booking.com. I have used their services many times in the past and can fully recommend them. Thank you for reading. There is a box for comments below. Say something. I shall be happy to read.